how we make a better film:

What we call production normally starts on the first day of filming and finishes when the shoot ‘wraps’. Before that, it’s pre production; after that it’s post production.

Before you go into video production there’s a lot to do. Most of the important decisions should be made before filming; leaving them until the day of the shoot will delay everything, and normally any competent video agency will schedule shoots very accurately.

As a rule, we won’t shoot anything until there’s a script – or for a live event or interview, a treatment or synopsis. Turning up somewhere and just shooting everything that moves does not generally result in a good film!

The keys to an effective video production process are planning and scheduling – things we’re expert in, having had many years experience.

Below you’ll find some useful hints and tips if you’re planning to have a video made  – especially if you’re going to appear in it yourself. 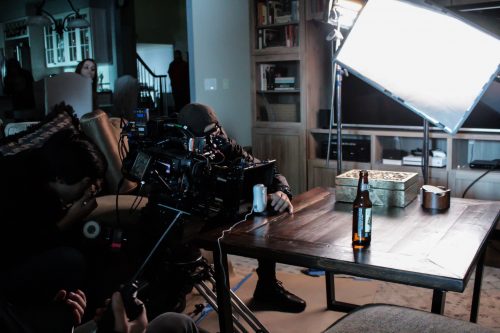 Cups of tea and coffee 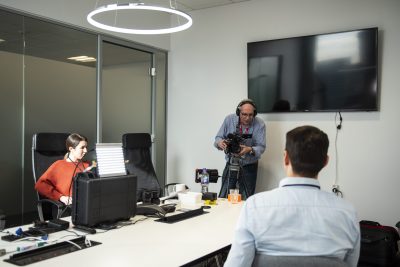 WHAT IS VIDEO PRODUCTION?

In the three main stages of video production, this part of the process – production – is really the middle. How to make a video properly can be quite a time-consuming process so any company offering video production services will be dealing with you for some week or even months, so it’s wise to make sure they’re the right people to partner with.

Most of production is taken up with the video shoot. In these few precious hours (or days, if you’re lucky) all the creative and logistical decisions that have been taken for the past few weeks or months will come together.  How it all pans out is entirely down to how well it’s all been planned and the professionalism and talent of the producer, the director, the crew and the talent.

So how does video production work at this level? Done well, it’s a masterclass in creative planning and as a client it’s important that you understand a little about your part in the process, so there are no surprises when you get to the shoot.

There are many types of video production; at SPL, a lot of what we do is corporate video and it’s quite likely that you or your colleagues may appear in the film. So read on for some more information about filming, what will happen on the day and how to prepare for it. 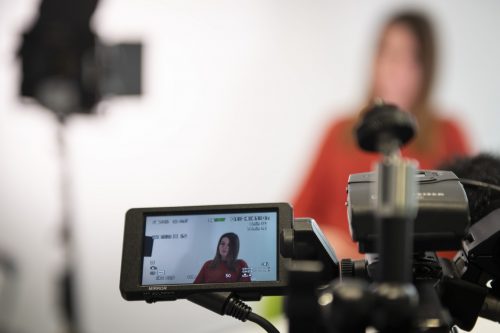 HOW TO LOOK GOOD ON CAMERA

If you’ve hired a video agency to make a CSR, corporate or training film, you may end up appearing on camera yourself. Most people are great at this, with a little preparation – especially if they’re used to standing up and presenting to clients or colleagues.

The trick of how to look natural on video is this: know what you’re going to be talking about during the film shooting – inevitably it’ll be your field or specialisation – and have any relevant facts and figures at your fingertips. And be enthusiastic about it. That’s it!

It’s important that you sit properly and don’t slouch. You need to look (and feel) comfortable. People will know when you’re not! For everyone we recommend either knees tight together with hands in the lap or for a slightly more informal appearance, legs crossed with hands again on lap. Hand gestures are fine in moderation –  keep them within the ‘shape’ of your body – so nothing too wide or high othrwise your hands might go out of shot which looks odd. And it goes without saying that ‘manspreading’ just looks awful!

Normally for corporate film production you’ll be ‘interviewed’ – that is to say you’ll be talking with another person who will be ‘off camera’ and you’ll talk to them. That person will help you answer the questions in the right way so the director (often the same person) can get the ‘story’ or the narrative ‘angle’ they need for the film.

Your interviewer will ask you questions but in most cases you’ll be recording this interview rather than it going out live, so take time to review in your head what you’re going to say before you start speaking – and always answer the question as though it’s a statement. Never start off with ‘yes’ or ‘I agree’. Your interviewer will give you clues as to how to start off your answer in their question, so it pays to listen.

If you wear glasses normally it’s OK to wear them to be interviewed. People who don’t like to seen with their glasses will have to live with the fact that they wear them for a reason. Going without your normal glasses will make you stare at your interviewer as you try to make them out – which will look odd.

Some larger-scale productions will have a make-up person. Trust us, this IS how to look good on camera! If you are warned of this in advance, arrive at the studio wearing no make-up like professional actors do.  Then your make-up person will prepare you for the camera using products that will make you look great under the lights. Your regular regime probably won’t.  If you’re doing it yourself, you need to strike a balance somewhere between ‘office normal’ and ‘big night out’. Try to retain your natural skin tone however – so don’t go too ‘Instagram’! 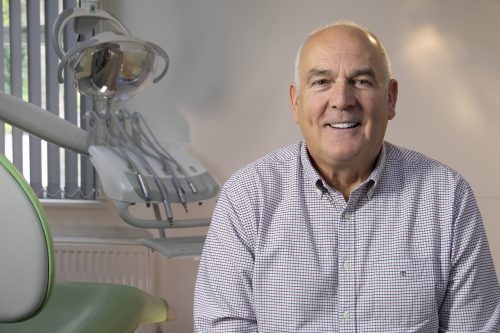 WHAT DO YOU WEAR TO A VIDEO SHOOT?

People often ask us what do you wear to a video shoot? And the answer depends to a degree on what sort of shoot it is. But assuming it’s a corporate video, the answer is you’d wear what you normally wear to meet with an important client.  So not ‘over the top’ but something reasonably sober. That may be a suit or something less formal, depending on the organisation’s style.

Ideally, bring a few choices of clothes with you to allow the director or DoP to make a choice as to what will light best and make you look good. Trust them, as they make these choices all the time.

What you should not wear when filming are small checks and fine stripes (as they ‘fry’ on camera) or anything with massive logos on,  There’s been a lot of talk recently about can you wear white on camera. White isn’t a good colour as the camera will struggle with contrast – especially if you have darker skin. Conversely, in different lighting conditions, very pale-skinned  people can look anaemic when wearing white. So best to avoid.  Ideal colours to wear to a flm shoot are muted shades with no big contrasts.

Make sure you don’t wear any clunky necklaces – as they could interfere with the audio.

And speaking of audio, you’ll probably be fitted with a personal microphone so one-piece dresses or high-neck jumpers are not useful. Ideal is a burron-up shirt or blouse so the microphone can be clipped to the front and the wire hidden under your clothing.

Sometimes the shoot will be ‘green screen’. That means you’d be filmed in front of a green screen and a suitable background will be added in post production. Anything green (or even vaguely green) is removed from the shot electronically, so bear in mind! 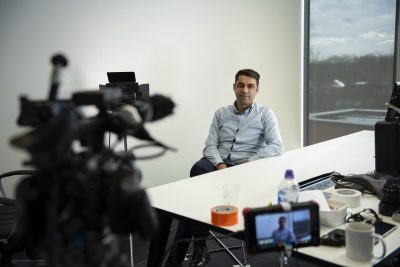 HOW TO BE COMFORTABLE IN FRONT OF A VIDEO CAMERA

Remember how to be more confident in front of a video camera is all about preparation.  That’s not the same as rehearsal! Preparation is knowing your specialist subject very well (which is probably why you’ve been asked to appear in the first place) and being enthusiastic about it.  From our film production point of view the worst people to interview are those who have been pushed into it by their boss. They are definately NOT relishing their 15 minutes of fame – but they should, as it’s not difficult with the right attitude.

It’s best to find out in advance from the video agency the sort of questions you’ll be asked, in case you need to gen up on relevant figures or names, but NEVER OVER-PREPARE.

Don’t expect an autocue or even ‘idiot boards’ when filming because unless you’re a trained presenter, these will not help you; the viewer will see your eyes wandering away from your interviewer’s eyeline – making you look dishonest and shifty.

Remember, normally the corporate film production interview isn’t ‘live’ so you don’t have to get it right first time. Most media production company interviewers are more than happy to run through questions several times until everyone’s happy with the answers.  After all in 99% of the situations this isn’t a combatative situation – you’re all on the same side, just trying to get the best and most natural-sounding interview.

Don’t even think about ‘learning’ your answers for your corporate film production.  Even if you do manage to blurt it out in one go, it will just look (and sound) false and you will almost certainly frustrate yourself if you can’t get the lines out the way you rehearsed them! (We’ve been there – we’ve seen it!)

And any film production person who suggests you talk direct to camera (unless it’s a very short line to deliver, perhaps for commercial video production) has spent too long at film school and not enough time on shoots in the real world. It can look false and makes non-professional interviewees very uncomfortable.

So follow our tips above for how to be natural on video and have fun during the film production – it’s got to be better than another boring day at the office!